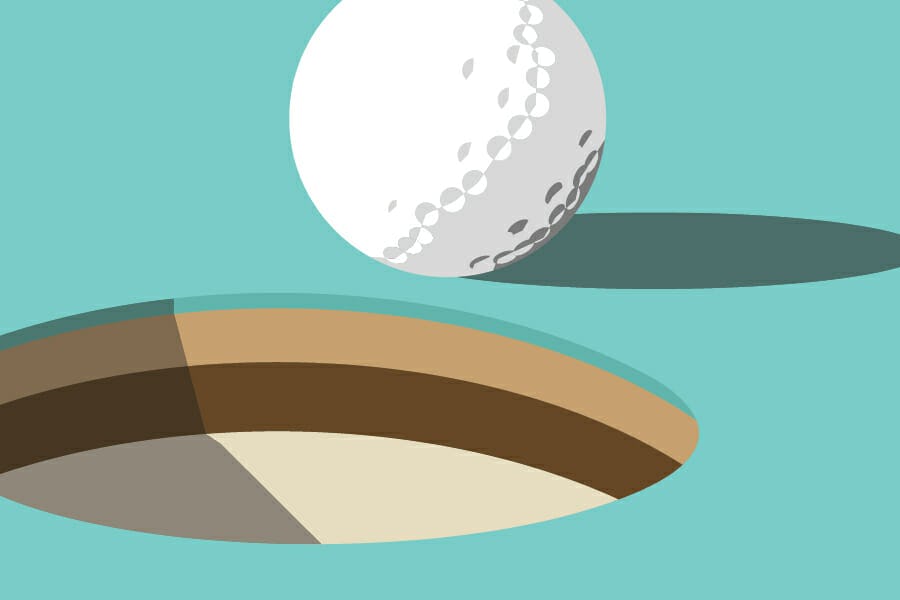 When professional golfers play a round, few consistently beat par. The same applies to professional fund managers, asset managers and stockbrokers. While some number will inevitably beat their benchmarks
in a given year, most struggle to deliver value over time for the risks they are taking.

We know this because long-term benchmarking studies allow investors to distinguish between an efficient portfolio, where risk is rewarded, and an inefficient one, where taking on extra risk does not deliver correspondingly higher returns.

One example is ‘SPIVA’, the Standard & Poor’s Active Versus Index study. Delivered since 2002, and available for the Australian, US, Canadian, European, Indian, Japanese and Latin American markets, this free scorecard shows that about 70 per cent of traditionally active (or forecasting) managers detract value from the return to which the investor is entitled for the risk they are taking.

Investors themselves do even worse. Each year, the DALBAR Quantitative Analysis of Investor Behaviour measures the effects of investor decisions to buy, sell and switch into and out of mutual funds over short- and long-term time frames. The results consistently show the average investor earns less – in many cases, much less – than mutual fund performance would suggest.

So, the evidence shows that the average fund manager, trying to outguess the market, detracts value and the average investor does even worse, primarily because they make emotional decisions, try to time the market or fail to diversify.

Of course, everyone thinks they know more than the market in aggregate, but the scale and competitive nature of markets (82.7 million trades worth nearly half a trillion dollars a day in 2016), tells you that it beggars belief that someone sitting at home in front of the screen can do better than what the market delivers.

This is why benchmarking tools are indispensable for advisers who want to show existing and prospective clients they are getting value for the risks they are taking.

The most common approach involves comparing historic returns with similar investments or similar risk. As an adviser, I used a process that assessed portfolio efficiency, construction, asset allocation and comparative performance. This helped expose areas where a portfolio might require attention.

This adds rigour to what is too often just guesswork. For instance, if you ask someone:
“How is your portfolio performing?” the usual answer will be “pretty well”. This response is typically based on the observation that it’s increasing in value, without reference to the fact that the market has gone up anyway and the client is making contributions.

At this point, the adviser should push back and ask the client how it’s performing against an appropriate benchmark. The resulting blank look becomes the cue to introduce the golfing analogy. What sort of professional golfer couldn’t tell you whether they are getting birdies, pars or bogeys?

Portfolio benchmarking can answer the following questions: How has your portfolio performed?

What returns have you achieved? How concentrated is your portfolio? How much risk have you taken? Is this an efficient way of investing? Is there a better way?

This tool showed me in my former business that many people form investment portfolios that depend on a combination of luck, guesswork and greater risks than they realised they were taking on.

In fact, out of 150 portfolios we analysed, the average annual return was more than six percentage points below the respective index benchmark. The results were even worse when portfolios, many of them self-managed super funds, were benchmarked against the returns of broad asset classes and sub-asset classes.

We adopted this benchmarking tool because we had become jaded by using conventional wisdom and forecasting investment approaches, in which active managers made great promises, only to provide excuses after the fact as to why they hadn’t worked out.

There will be portfolios that outperform the market. But we found in each case there was an easily explainable reason, such as a concentrated position in an individual stock that had performed strongly in the given period. The question we would ask is how do you pick those in advance?
Is it luck or skill? How repeatable is this?

One client I worked with thought an Australian share portfolio she had inherited had done “pretty well” because it had been worth $4.1 million five years before and was now worth $9.4 million. But our analysis showed that had she just got the return of the ASX 200 over that period, the portfolio would have been worth $11.2 million. By weighting towards small and value stocks, the return would have been $11.7 million, an outperformance of $2.3 million and for less risk than she had taken.

‘There is no financial Santa Claus’

This case is a warning to investors about the risks of being taken in by managers who promise great returns based on their ability to pick stocks, time markets and make accurate forecasts. But it is also a warning to advisers to remove the “I reckon” from client conversations and instead show them that you can measure return, risk and risk-adjusted return, and explain what drives sustainable returns over the long term.

There is a trend towards evidence-based, non-forecasting investments, for good reasons. Indexing is a step up from traditionally active management, but you can go one better by adopting an approach that builds low-cost diversified portfolios around long-term drivers of return.

We need to tell investors that there is no financial Santa Claus or Easter Bunny but there is a way to structure portfolios around the dimensions of higher expected returns without needing to outguess the market.
And advisers must have a tool to demonstrate this. If golfers can measure their performance hole by hole, why shouldn’t investors do the same?